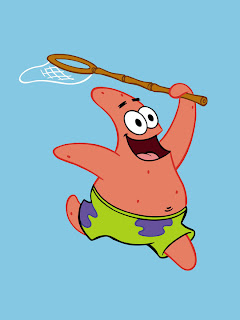 (Spongebob draws a jellyfish) Patrick: "It's pretty good, Spongebob, but it lacks basic construction, and your perspective leaves a lot to be desired."

"I can't understand anything."

"Well it may be stupid, but it's also dumb!

"Now that we're men, I changed my underwear."

"Oh I know! I'll be Mr. Seaweed Monster Man and live happily ever after in Bikini Bottom!"

"East? I thought you said Weast!"

"Are you Squidward now?"

"ISLAND! I got an awar-(gasps for water)

"Oh yeah? Well which street said that? Was it you?!" (attacks the street)

"The inner mechanations of my mind are an enigma..." (Goes to his thoughts... carton of milk tipping over)

"We should take Bikini Bottom, and push it somewhere else!"

(See's a sign that says "Try Barnacle Chips! They're delicous!" Spongebob: They are most certainly not delicous!) "Not the way i use them!"

(Patrick to his baby clam) "Hey! What about daddy?" (Clam drops a coconut on patrick) "Thats my boy!"

"Mary had a little lamb, whos fleese was white as, PICKLE FISH LIPS!"

"Whoevers the owner of the white sudan, you left your lights on!"

"Haha my pickle started out in a jar, and now it's back in one!"

(To fire hydrant) "Are you squidward... thats ok take your time"

(Sandy is trying to make Spongebob stop making squirrel jokes Patrick comes in) Oh hi Sandy me Patrick do you understand? Squirrels...
"Have I ever not been right?"
"You lost your name tag?!? HYEE HYEE HYEE!"

"Its ok Rocky, you can go when you feel like it"

"Were not talking about some dumb mail fraud schemer hijacking here,WE STOLE A BALLOON!"
(Gets hit by bowling ball, falls into hole, then bowling ball drops on head) "FINLAND!"

(Spongebob drops office supplies on Patrick) "IT'S THE APOCALYPSE!! OFFICE SUPPLIES RAINING FROM THE SKY!!"

"It's called the Ugly Barnacle. There once was an ugly barnacle he was so ugly everyone died. (Spongebob: That didn't make me feel better)

(Dennis rips off seaweed moustaches) (Patrick to Spongebob) Is he a mermaid?

(Spongebob draws a jellyfish) Patrick: It's pretty good, Spongebob, but it lacks basic construction and your perspective leaves a lot to be desired." (Frankendoodle)

"Me thinks it's mutton-tastic!" (Dunces & Dragons)

"Whose first words were 'may I take your order?'" (Help Wanted)

"When in doubt, pinky out!" (Tea at the Treedome)

(Spongebob blows a bubble in the shape of an elephant, Patrick laughs and claps) (carnival music) "Hahahahahahahaha, it's a giraffe!" (Bubblestand)

"The inner machinations of my mind are an enigma." (Thought bubble of a milk carton tippinbe desiredg over) (The Secret Box)

"Look for me at the cermony, I've got a surprise for you!" (The SpongeBob SquarePants Movie)

(Turns off TV advertising Tentacle Acres as Swuidward is watching) "I hate this channel." (Squidville)

"Are you Squidward now?" (Squidville)

"We should take Bikini Bottom and push it somewhere else!" (Sandy, SpongeBob, and the Worm)

"An award? I've never got an award before!" (Big Pink Loser)

"JELLYFISH! I got an award!" (Big Pink Loser)

"ISLAND! I got an awar-(gasps for water)" (Big Pink Loser)

"Okay, bye Sponge--who was I talkin' too?" (Have You Seen This Snail?)

"I've got the footage alright!" (as he stares at nothing but a lens) Mermaid Man and Barnacle Boy VI)

"Spongebob, when are you gonna learn? No, means, YES!"

(sees Sandy in her bathing suit): "Sandy's a girl?" (Pressure)

"My pickle started off life in a jar... and now it's in one again!" (Mermaid Man and Barnacle Boy IV)

"Does anyone have a quarter?" (Sleepy Time)

"You know, these were white when I bought them." (The Fry Cook Games)

"I want the warm NOW!!" (Survival of the Idiots)

"I know a lot about head injuries. Believe...(drools and Spongebob snaps his fingers)...me." (Squidward the Unfriendly Ghost)

"One watermelon picked fresh from the manure pile, Your Spookiness!" (Squidward the Unfriendly Ghost) 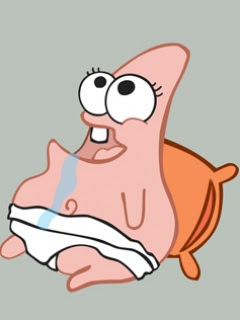 "Being grown-up is boring. Besides, I don't get jazz." (Grandma's Kisses)

(In the scene, Nematodes drank Sponge's house and it's gone. Sponge, Squid, Pat, and Gary are standing in Sponge's yard) about one minute later... "SpongeBob, your house is gone!" (Home Sweet Pineapple)

"Boy! Crime fighting makes me hungy, and this yellow popsicle hits the spot!" (The Smoking Peanut)

(See a sign that says "Barnacle Chips. They're Delicious!" Spongebob: They're certainly most not delicious!") Not the way I use them!

"Okay, which one of you flatfoots stole my lollipop?"(Life of Crime)0

"Is mayonnaise an instrument?" (Band Geeks)

"Maybe a story will cheer you up... Once upon a time there was an ugly barnacle. It was so ugly that everyone died. The end." (Something Smells)

(Patrick is holding tiny Squidward and a pickle) Awwww. See they like each other. (Patrick makes Squidward kiss a pickle) (Mermaid Man and Barnacle Boy IV)

(Patrick is talking to a baby clam) Hey! What about daddy? (Baby Clam hits Patrick with a coconut) "That's my boy."

(Spongebob is falling and Sandy tells Spongebob to land on his bottom. Spongebob asks, "Like this?", pointing to his bottom. Patrick tries to correct Spongebob) "No, your other bottom!" (I Had an Accident)

"You cannot stop the unstoppable"

Hi Spongeboop. SPONGEBOOP?! HAHAHA I SAID SPONGEBOOP! HAHAH (Missing Identity)
(Sandy: Patrick don't you have to go be stupid somewhere else) Not until 4 (I Had an Accident)
"I like pie." (No Hat for Pat)